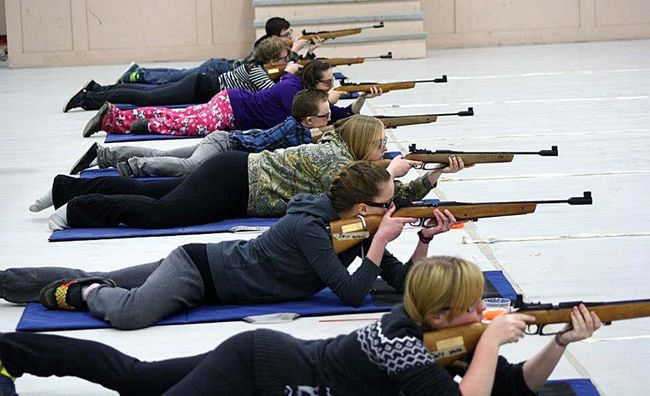 Cadet marksmanship had its roots in familiarization training with the Canadian Forces. Its current focus, however, is on teaching cadets the proper use and safe handling of firearms for recreational purposes only. The marksmanship program has been specifically designed for youth and is based on Olympic-style competition.

Self-confidence, acceptance of responsibility and sports etiquette are just some of the life skills acquired from the training. A healthy respect for firearms, the development of proficient use of rifles for sport and recreational purposes, and an improvement in self-discipline are additional benefits.

Cadets use the Daisy 853C air rifle that fires a .177 calibre pellet and has a round aperture sight. Because of the low muzzle velocity, the Daisy 853C is not classified as a firearm under federal gun legislation.

Throughout the year, cadets participate in a series of competitions at the local level that culminate in zone and territorial/provincial competitions and the annual National Cadet Marksmanship Championship.

The rofles, pellets, portable shooting ranges and targets are provided.

Qualifications are based on shooting 10 pellets onto two targets for all levels. The 10 pellets are fired on the same relay. The highest qualification attained during the year is retained. For a Marksman qualification, a cadet must obtain two groupings of 3 cm on two targets. For example:

Three additional Cadet Marksmanship Championships Series Pins are awarded when a member competes in the various levels of competition.